Back to all posts

I’m a really crap artist. No, I don’t mean in the big “Artist” sense of things…I’m actually pretty happy with some of my skills as a guitarist and songwriter and overall musician (which is not to say they couldn’t get a ton better). I mean it in the Leonardo DaVinci/Michelangelo/anybody who can draw something that doesn’t look like it was done by a drunk 6-year-old kind of way.

That said, I sometimes find it helpful to do some little doodles to express something and here’s one of them.

But first…the context for this is that we have an EP Release Show coming up on Thu, 9/5 at Fitzgerald’s. We’re opening for my good friends, The Claudettes, and this is a really big deal for us. More on that below, but if you’re in Chicago on 9/5, it would mean the world to us to see you there.

Ok…so, here’s the thing. I’m kinda terrified about this show. Not because the show is scary and not because I’m worried people won’t show up (a perennial fear that never actually comes true), but because we’ve done something I’ve never done before: we’ve hired a publicist.

Why is this scary? Because that means I’m actually gonna see if anyone wants to listen to our recordings or not. Let’s be honest…I’m super bad at promoting myself. And I’m trying to learn, but part of it is probably that, psychologically speaking, it’s a defense mechanism. If nobody ever hears about it, I don’t have to find out if anybody actually likes it. This means I can safely stay in my little cycle that roughly goes like this: write song —> record song —> decide I can make something better —> ignore song I just made —> start new song. It’s safe, but also deeply unsatisfying.

And here, friends, is what I realized about how I make decisions that are scary: 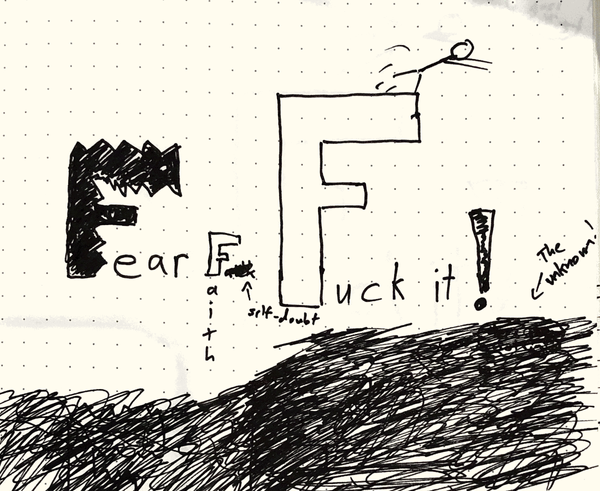 First, there’s the Fear. And it’s a monster.

And I wish I had more Faith…I wish it were a bigger component. But it’s kinda just a little seed…

The launchpad always seems to be…well…just…”Fuck it!”. Like…at some point, I just close my eyes, grit my teeth, and just say “Here goes nothing!” and jump.

And it’s not just music. I think this is pretty much how I’ve made a lot of my major life decisions. I often don’t have confidence in my decisions…but if I can feel that Fear is there and Faith is also there (even if it’s small), then I just have a pretty robust “Fuck it!” factor. The key, though, is that all three are there:

What I’m tying to say here is that “Fuck it” doesn’t mean I just run around doing random things like “Fuck it…I’ll steal that car! Fuck it…I’m gonna drink a case of beer for breakfast on my way to work!”. That’s why fear and faith need to both be there. And, if they are, “Fuck it” can be a positive tool.

So…fuck it! Let’s see if we can get some attention for this EP. Let’s see if maybe my songs could mean something to people I’ve never met. Here goes nothing…